[caption id="" align="alignright" width="300" caption="Image via Wikipedia.  This is a picture of the cover of Jacobi's work."] 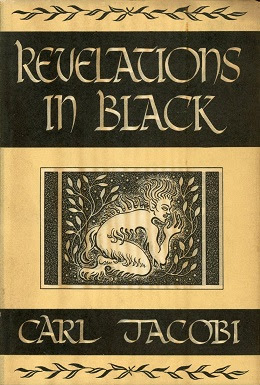 Before introducing "Monster Festival", I’d like to mention that I have always been fond of it.  I first encountered it at my school library in elementary school, and read it in middle and high school several times after.  At one time, I could tell you every story (in order it appears in the book).  It also introduced me to my favorite illustrator, Edward Gorey.

The opening story, “What Was It?” by Fritz James O’Brien, is absolutely amazing.  The inhabitants of a boarding house are plagued by the arrival of an unseen assailant.  By unseen, I mean totally invisible.

“Revelations in Black” by Carl Jacobi, is an unusual vampire story.  It’s also very hard to find.  Most of his work (from what I can tell) is out of print.  In short, a man meets a woman vampire who lures him away.

When I was a kid in high school, I made a movie for a creative writing class based on “The Thing in the Cellar” by David H. Keller.  Until I made this story into a short film and really started to think about what the story meant, I was never afraid of basements.  Now I won’t go downstairs unless my dog is with me.

There are other stand-out stories in the book as well, but I’d like to discuss Edward Gorey for a moment.  He is the illustrator and author of many books and works of art.  His drawings are easily recognizable by the elongated forms of the people and animals, as well as the wild patterns.  Gorey’s drawings contain a plethora of patterns, on anything and everything.  Clothing, animals, wallpaper, and vases all have intricate designs.  Another recognizable aspect of his work is the eerie subject.  Most of his art is unsettling.  One piece that I have is a scene from the doorway of a large mansion.  In the middle of the picture is a baby, floating between the top and bottom floors of the house.  You can’t tell if the baby fell from the arms of the person above, or was being tossed in the air by the person on the first floor.

This book is a great introduction to many authors (Jacobi, O’Brien, and even Stoker), as well as to Edward Gorey.  If you’d like to get a book for a younger horror enthusiast, this book is appropriate.  "Monster Festival" was one of my first horror books and will most likely continue to be a favorite for as long as I live.
Alexander Woollcott Algernon Blackwood Arthur Machen Bram Stoker cancer Carl Jacobi crazy David H. Keller E. F. Benson Edgar Allen Poe Eric Frank Russell Fitz-James O'Brien illustrator insane Jane Rice L. P. Hartley Literature Lord Dunsany Margaret St. Clair vampire