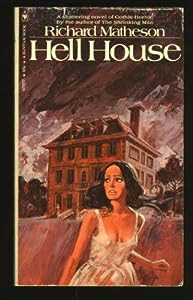 Recently I started getting interested in haunted house stories, which represents a break in my usual zombie-filled reading list.  I read “I Am Legend” and absolutely loved it, and I wanted to see what Matheson could do given a haunted house theme.  I was in no way disappointed !

A scientist, his flaky wife, and two mediums are charged by a dying millionaire to investigate the phenomena of Belasco House.  Over the years, Belasco house has earned the reputation for being fiercely haunted, and is therefore also referred to as Hell House.  The four people are supposed to survive a week in Hell House, recording data and coming to a solid conclusion of whether or not the soul persists after death, and whether or not the house is actually haunted.

At times it was hard to remember that the book was set in the 1970s, because the language was modern.  Or, I suppose it could be said that the writing was ‘timeless’.  Don’t misunderstand me, I love disco, but I don’t want to read a ghost story in 2010 and constantly be reminded of the time period.  This attribute has kept Hell House a novel for the ages.

The haunting itself was masterfully written.  In the beginning I was afraid that the haunting phenomena would be tame and sparse, but in actuality Matheson was taking his time establishing the characters.  Once the haunting began, it was page-by-page madness.  I didn’t know from one moment to the next what to expect.  There was no predictability, and every time I thought I had figured out the haunting I was wrong.  Matheson’s greatest strength was in his ability to keep the reader in the perspective of the characters by never giving too much away at one time.

Towards the end of Hell House, I became worried that Matheson had written himself into a corner and wouldn’t be able to give the story the strong finish it deserved.  Thankfully, I was wrong again.  The ending had the right amount of suspense as well as closure.  The ending definitely ‘fit’ the book, both explaining the haunting as well as showing character growth.  By the final page, the characters had progressed in maturity and understanding in a natural way, almost as if they were real people.

Hell House is a great introduction to the works of Richard Matheson, but is also enjoyable to anyone who likes scary stories.
ghost haunted house Literature possession Richard Matheson