Lindqvist, John Ajvide "Let the Right One In" 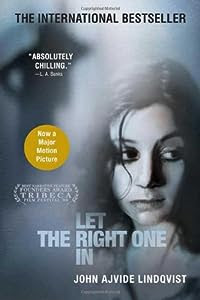 I read this book in preparation for the two movies.  My friends gave rave reviews to the movies ad I truly want to see them, but I believe that stories that come in multiple forms should be experienced in that order.  In this instance, read the book is followed by see the Swedish film, and ended with a viewing of the American film.  There are a few different reasons I follow this method.  One is that I’m already losing some richness of meaning and story by not being able to read it in the original language, and then secondly that I want to know what the author had in mind before I see other interpretations.  I don’t like reading a book and already having someone else’s ideas of how it should look in my mind.  I found that when I saw Vanilla Sky it made no sense whatsoever.  Then I found the original Spanish version, Abre los Ojos, which made infinitely more sense.  That was the defining moment in my philosophy.

The story itself is very interesting.  A little boy named Oskar is tortured by his classmates.  One night he meets mysterious Eli, a child his own age that lives in his apartment complex.  Eli lives with a man named Hakan, who incidentally, does Eli’s dirty work and murders people to bring Eli blood.  As Eli and Oskar become closer friends, Oskar learns Eli’s secret and has to decide whether or not to continue being friends with the vampire.

The story is a welcome change from the usual vampire mythos.  Instead of being the sex symbol that Anne Rice and Stephanie Mayer have written, Eli is a sexless, shape-changing vampire.  Eli also is repentant about having to kill in order to feed, and takes pains to make sure that the victims are not turned into vampires themselves.

The murder scenes in the book were certainly scary, but overall I thought that the characters were sad and pitiful.  It seemed like everyone in the book was really screwed up and had to overcome obstacles they placed in their own way.  I felt sorry for Oskar, who was the target of bullying and virtually ignored at home [excepting when his mother was nagging him], Eli was alone and due to being a vampire couldn’t ever have a normal relationship with anyone, Oskar’s father was a hopeless drunk, and other minor and major characters also had a myriad of problems.  The element of sadness in the book made it realistic.  People have problems, and when a writer includes the problems in the book, the characters have more personality and depth.