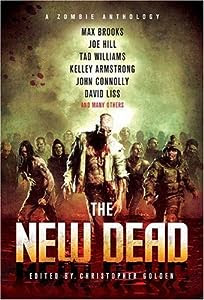 This book is one of many that I read over the summer.  I'm just now getting around to blogging about it.

This book was pretty entertaining.  My favorite story was "Twittering from the Circus of the Dead" by Joe Hill.  I think it's my favorite because I started out hating it.  I don't have a Twitter account because I honestly don't think I do that much in a day that I can honestly put on the web and have people want to know about.  I was glad that this story was at the end of the book, because I was contemplating not even reading it.  When I did, it blew me away.  The main character is the girl who is tweeting (tweeting?  is that the right word ?) throughout a family vacation.  They stop at a circus claiming to have live zombies, and everything goes to hell.  Great story.

Brian Keene's story "The Wind Cries Mary" was really sad.  A husband watches each night at the same time as his dead wife shambles up to the door and tries to get inside.  He wonders if she misses him, and if she has the ability to think. He feels guilt because when the dead rose he didn't have the courage to put her down properly, and instead placed her outside on the back porch.   There's a really good twist that I'm absolutely dying to tell, but I can't, because it will positively ruin the whole story for you.

An old fashioned voodoo story, "Delice" by Holly Newstein, tells the story of a young girl raised from the dead by a powerful bokor.  Delice is sent to the plantation where she was killed in order to kill the plantation owners who had abused her and several other slave girls.  This story is very graphic, both in the death scenes, but also in the treatment the slaves receive.

Even though some zombie stories are sad, so far only one has made me cry.  When I was about two to three pages from the end of "Family Business" by Jonathan Mayberry, I started crying and couldn't stop.  It got so bad my mom came into my room and asked me what if someone had died.  I couldn't stop crying, and the story stayed on my mind for several days later.  Benny Imura hates his older brother Tom.  He blames Tom for their parent's death and subsequent zombification when Benny was four.  He remembers fleeing the house in Tom's arms, but not much else.  Benny and Tom live in a gated community and when Benny comes of age he has to choose a trade.  He tries many jobs, and finally decides reluctantly to be apprenticed to his brother.  The community regards Tom as a hero because he goes out into the wastelands inhabited by the dead and puts them down at the request of the families.  When Tom takes Benny out into the wasteland to show him the job, everything changes.  Ok, so I might have lied earlier, this is my favorite.  "Twittering" would then have to be my second favorite.

There was only one story that I wasn't really a fan of. The story  "Lazarus" by John Connolly was told from the point of view of Lazarus after he was resurrected from the tomb.  I'm sometimes at a loss as to what to think of zombie stories that get mixed too heavily with religious themes.  As I'm writing this review I'm paging through the story trying to remember what it was that I didn't like about the story.  I think part of it was that I can't remember the actual account of Lazarus in the Bibile, and so I know I'm missing out on something.  Anyway, the story itself wasn't poorly written, it just "didn't do anything for me", if you'll pardon the expression.  However, in the future I will not hesitate to read another story by John Connolly.  It's not right to judge an author solely on one work, especially if you are like me, and can't really remember why you didn't like it in the first place.

All in all, "The New Dead" is a great book and I highly recommend it to anyone who wants a variety of stories.  The authors are all top of their game.  This book makes a good zombie introductory book for someone who isn't quite head over heels for zombies yet.  The stories are accessible to most readers, although I would caution giving this book to a reader who is very young.  Although the language isn't very difficult, some stories contain themes that may upset a younger reader, such as rape.  If you're giving this book to a younger reader, I suggest previewing it first and deciding whether or not the themes are too adult.  If you are an adult - have fun !  It's a great book.