More stories by an amazing author...

If you are easily offended, it’s best not to read Lansdale’s “On the Other Side of the Cadillac Desert with Dead Folks” story as your introduction to his work.  The first Lansdale story I read was “The Long Dead Day” [discussed in The Dead That Walk].  I loved the story, but forgot who the author was soon after.  [I spent my whole summer reading zombie anthologies one after the other and sometimes its hard to keep track of authors.]  Later I came across a story involving his fictional character, Reverend Jedidiah Mercer, called “Dead Man’s Road”.  That story was likewise phenomenal, and unfortunately the book in which it was originally published has since been out of print.  The 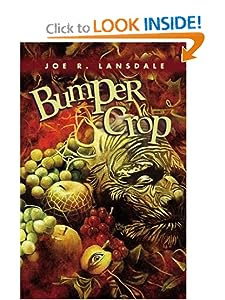 third story I came across was “On the Other Side of the Cadillac Desert with Dead Folks” [found in Zombies : Encounters with the Hungry Dead and discussed in this blog].  I was offended at first, and it took me awhile to wade through those feelings and begin to appreciate the story.  When I did, I realized what an innovative, trend-setting author Lansdale really was.

I decided to find more of his works in the hopes that I could gain a better understanding of Lansdale as an author.  I also wanted to see what he was capable of doing when not confined to reanimated corpses.  I picked up Bumper Crop when I found out that Dead in the West, like many of his books, was out of print.  Lansdale describes Bumper Crop as an anthology of stories that were memorable to him for a variety of reasons.  An added bonus is that Lansdale himself introduces each story and discusses the publishing successes or failures and the inspiration for the story.

“The Shaggy House” is a really wild story.  There isn’t another word I can think of that would describe it so well.  It is about a house that causes other houses on the block to become diseased and stricken.  Two wily old men take on the house in an attempt to reclaim their neighborhood.  It has a sci-fi edge to it, and is actually very funny.  This story renewed my interest in haunted house stories.

“Pilots” – with Dan Lowry.  This story was really freaky.  It is suspenseful, thought-provoking, and sad.  The story follows a convoy of truckers who must band together to escape the murderous attacks of a black car, aptly named the Black Bird.

“God of the Razor” – I think if I were to give an award for the weirdest story in the book – it would go to this particular piece.  My best description is haunted house meets possession meets elder god meets serial killer.  And I’m not even sure that’s correct.  I just know this story rocks house.