October 23, 2010
This is the sequel to the book "Dying to Live".  It continues with the same characters and introduces new characters.  Again, unfortunately I am not able to say too much about the storyline, as it will give away too many spoilers.

This story places the protagonist from the first novel, Jonah Caine, into the background and brings forth a heroine, Zoey.  Zoey is one of the first generation children born after the apocalypse.  She has never known a world without the living dead.  The story deals with her coming of age, as well as her struggles to understand the world her parents knew.  Zoey is the daughter of one of the characters in the first book. 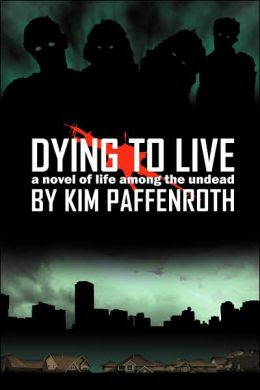 his identity, as well as ponder his existence.  He suffers from amnesia and can't remember his name, his family, or what he did when he was alive.  His memories of zombiehood in the very beginning are also not clear.

As with the first book, "Dying to Live: Life Sentence" pits our well-meaning survivors against a group of humans who have developed a third way of living and governing their little slice of desolation.  However, in this story, the groups of survivors must decide what to do when someone runs afoul of both camp's laws.  Which set of laws should the survivors abide by when both of their worlds are so different?

I recommend "Dying to Live: Life Sentence" to anyone who enjoyed the first book, or who is looking for a twist on the classic zombie story.  (Disclaimer:  Don't read this book without reading the first book!  You will miss so much of the back story.)