The Origin of it All

October 23, 2010
This was the book that started my literary zombie craze, as well as the Permuted Press publishing company.  My boyfriend purchased it for me as a present for Christmas 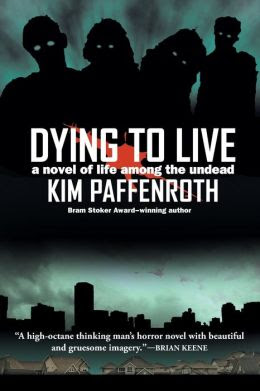 2009.  Unfortunately I am not able to give much insight into the plot because it is very complex, and any spoilers will ruin the experience for any prospective readers.  Suffice it to say, you NEED to read this book.

The plot is easy to follow and is very indicative of the genre in general.  It can be summed up as : people during the zombie apocalypse trying to survive.  However, this book turns out to be so much more than the usual struggle for survival.  At points in the book, I found myself crying, laughing, and terrified out of my wits.  From the first sentence in the book all the way to the end it was captivating and terrifying.  Dying to Live was so good, in fact, that I stayed up all night and read the entire book.

Characters can make or break a zombie novel - and the characters in Dying to Live leave nothing to be desired.  The story follows the travels and experiences of Jonah Craine, who is an ordinary man trying to survive in a zombie-ravaged world.  Throughout the book he grapples with the notion of staying human despite the monotony of trying to find a safe hiding place, survive day after day, and find food.  He is a strong character, though not to the point of being unnatural.  The other characters that Jonah encounters bring a sense of emotional balance to the story.  One such character is Popcorn, the young boy who became part of the group after his mother was killed by zombies.  While Jonah views the undead with respect and apprehension, Popcorn's experiences have created a violent and proficient fighter who attacks with a reckless and daring style.  Another character of note is Tanya, a mother who lost her two children early in the fall of civilization.  She adopts Popcorn and raises him as her own.  Her strength and violence are different from those of Popcorn, hers are based in the resignation that comes with knowing that everything familiar has changed, and adaptation is neccesary for survival.

This book also features one of the most interesting anti-zombie compounds that I have come across.  It is part museum, part natural barrier, and allows for an ease of access to supplies in the city that I haven't encountered before.  The best part is that it is based, in part, on a real location which he discusses in an author letter at the end of the book.

The aspect of the book that appealed to me the most was the rebuilding of civilization.  Theoretically, all government and law ends when the dead begin to walk, so now what do people do?  Using two surviving groups, Kim Paffenroth deftly shows two diverse paths that humanity can take when all order is destroyed.  One path is lead by a compassionate and pragmatic leader who uses group initiation rites and individual responsibility to motivate, while the other uses violence, intimidation, and control.  I can't give away any more than that, but I will reiterate that this is a book that is not to be missed !