[caption id="" align="alignright" width="240" caption="Image by csullens via Flickr  (I have no idea why there is a cat in the photo, but it's the only one I can find on wordpress to use.)"] 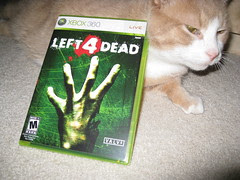 I have played this game on both the XBOX 360 Slim and the Computer.

This game is a first-person shooter that invites players to play as one of four survivors in a variety of modes.  It features hand-held weapons as well as guns and bombs.  There are also special zombies to encounter.  My personal nemesis is the Witch.  She sits and wails, and when you stumble on her she comes at you clawing with everything she's got.  Basically if you startle her, you better be wielding a chainsaw, if not, you're toast.  I'd recommend dodging her, unless you don't mind taking a heap of damage after a botched attempt to kill her.

Other special infected include Boomers - big, fat zombies that spit on you in order to attract more zombies.  If you get too close and blow one up, you likewise are covered in bile / vomit and can expect a storm of zombies.  Another personal favorite that seems to favor tearing me apart are the too-agile hunters.  They are hoodie-clad hooligans that leap from buildings after you.  When caught, they too tear you to pieces.

The game also features four playable maps.  If you are working with a competent group of friends, you can finish each map in about an hour, give or take a little.  The maps are "No Mercy", "Dead Air", "Blood Harvest", and "Crash Course".  If you are like me, and you get lost easy, you can get the AI to guide you while you are playing solo.  The maps also contain "Safe Houses" which serve as way points in campaigns.  In Safe Houses you can get more ammunition for your weapons, you can choose from a variety of other weapons, and you can use first aid kits to heal yourself and your companions.

While I enjoy playing Left 4 Dead on the XBOX, I find I'm a better shot when playing it on my computer.  That's just personal preference.  As far as I can tell, it is just as intuitive on the XBOX as it is on the computer.  Overall, it's a great game to play in the dark.  The maps are creepy and very intense.  The maps are populated with realistic buildings and car crashes. Another added pleasure are the car traps.  Vehicles with blinking red lights signal a killing horde of zombies if you happen to jump on them or shoot them - so be careful !  At the end of each campaign you are given various player stats which include but are not limited to number of infected killed, how much damage you have done to a particular special infected, how many friendly fire incidents, and various other elements.  These add a competitive edge to the game when playing with friends.

Since the second game is now available, it is worth noting that time has not diminished the playability of this game.  While it is true that the new game brings marked improvement in some areas, the old game is in no way rendered obsolete.  In fact, if you are unsure about this franchise, then I recommend purchasing the first game as an introduction.  If however, you enjoy first person shooters, or zombie games of any kind, this is certainly worth playing.