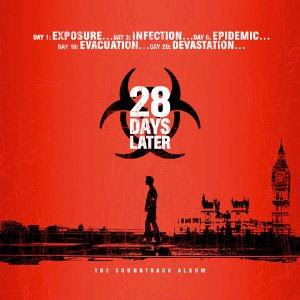 This is one of the most terrifying zombie films I have ever seen.  Period.  I'm even going to admit that it gave me nightmares.  I will go so far as to admit that it still gives me nightmares.  Especially the scene in the church when Cillian Murphy wakes up and is exploring the ravaged city.  When you see the film you will know exactly which scene to which I'm referring.

The film starts with the origin of the Rage virus and how it is spread.  It sets the framework for the rest of the film and shows the speed with which the infected travel.  The infected are capable of running very fast and even one scratch is sufficient to cause the virus to spread.  An added bonus is that the virus takes over the host within seconds, so when traveling with companions it is important to know exactly what is going on during every battle.  This element alone adds a measure of anxiety to the film, as the speed of the infected doesn't allow for many mistakes or for much careful planning and surveying.  Choices have to be made quickly, or many people die.

The music is haunting, the acting is amazing, and the scenes are very well filmed.  Another scene of note is the road trip through the body and car-filled tunnel.  The screams of the infected are heard well before they are seen.

Even if you are a purist who believes that zombies should be dead, and should not run, this is still a good movie to see.  Who knows - it may change your opinion.  This movie is fantastic !  The virus is believable, the acting is great, and the music ties everything together.  If you haven't seen this movie, I can't stress enough how badly you need to see it !